Building a Site with React and Contentful

A poster of Starry Night by Vincent Van Gogh followed me to each new dorm room in college until it ripped beyond repair. I loved that poster.

My poster of Starry Night often led to debates with my sister (a professional artist) about the merits and demerits of reprinting great works of art.

As much as I revere the original, I also love that printing technology can put Starry Night on tote bags, coffee mugs, posters, t-shirts, and more. Technology has made great art accessible to a wide range of people (without advanced printers and computers, original paintings can only be shared with people through painstaking replication via the original medium: oil painting on a canvas). 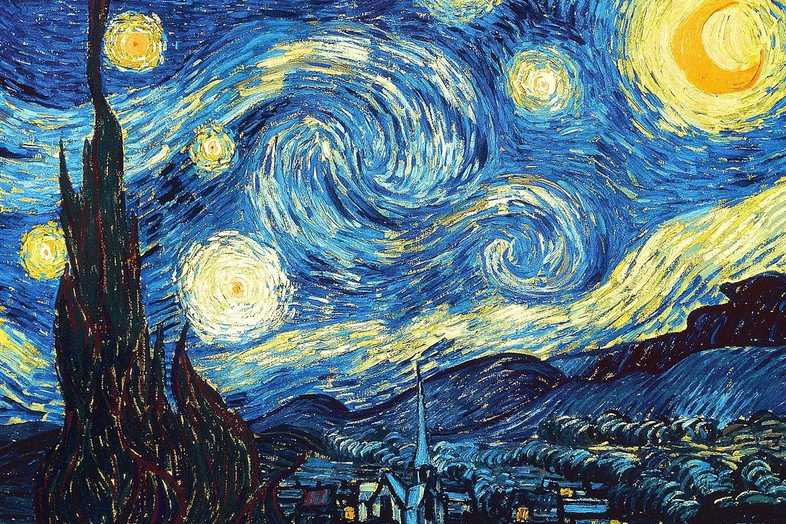 For the same reason that I love seeing Starry Night on a poster, I loved building a website with React and Contentful; together, they allow images and text to easily appear in various formats across multiple platforms.

It’s much faster and easier to resize and reuse the content you already have when you don’t have to painstakingly re-create for mobile, for web, etc. You basically just print it, again, and again, and again, in small and large and medium formats, in websites, mobile apps, multiple languages. Just…push a button on a printer to make copies. Easy, right?

Well, easy if you already know React, at least. I wanted to make little site about my dog, Watson, yet didn’t know how to code.

Sometimes a friend or family member babysits him, and it’s time-consuming to either write instructions or update and print new guides for babysitters since he learns new commands every day. A website seemed like a better way to manage this.

Here’s the site I built for my dog’s babysitters after learning the basics of Contentful and React: http://watson.surge.sh/. Following are instructions on how you can also build a site with Contentful and React with tips I learned while building my site. 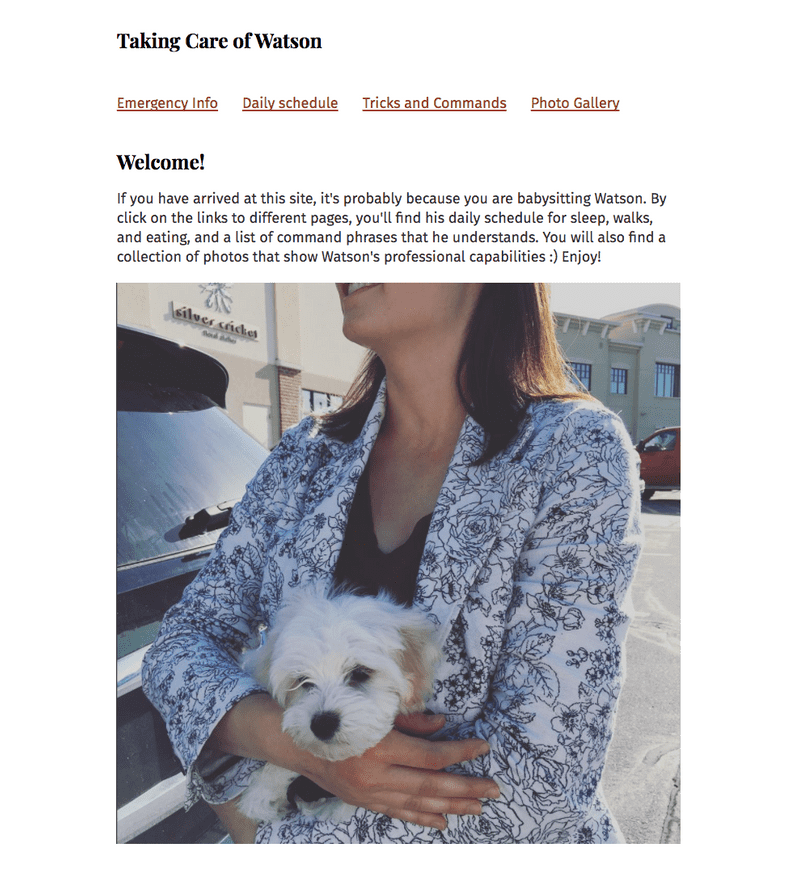 What is React? Why choose it?

What is Contentful? Why choose it?

Contentful is a headless Content Management System (CMS) that lets you organize your content into what could be called “modules,” or little bits of data that can be rearranged to appear nicely on mobile devices, tablets, computers, virtual reality devices (this is my own joke, but…maybe someday?) and more.

Actually, the way Contentful handles bits of content means that you can push content out when new technology develops without having to redesign, rewrite, or rethink all of it for a new format.

Pulling data in and pushing data out

If you have a JSON file with content in it, you could pull it into Contentful using contentful-import, which I found out by chatting with a nice person in the Contentful chat window. Since I was creating new content, I didn’t need this and just created content straight in Contentful. For the first minute or so, I couldn’t figure out what a “content model” could or should look like. Luckily, the free trial offers a sample project that I opened and after looking around it for a couple minutes, I was good to go. 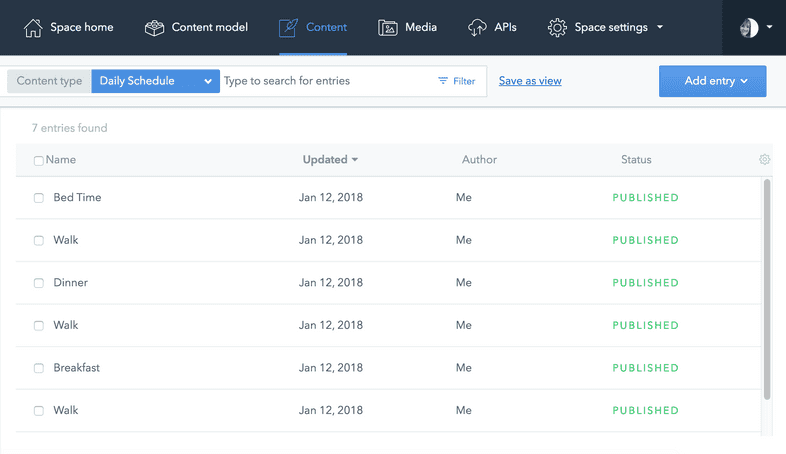 If you do create content directly in Contentful, make sure to name your fields in a way you can remember when you create GraphQL queries. If you use GraphiQL, it can suggest fields to you, but this will only help if the field names are clear and memorable.

As far as pushing data out to my site goes, I didn’t know which API or token I needed. I wondered why there were four APIs and two management tokens. The Contentful documentation on this was fairly fragmented, so I just installed the gatsby-source-contentful plugin and then put the example Space ID and Example token into my gatsby-config.js file. I think this was the right thing to do, because it worked.

Once Contentful and Gatsby were getting along well together, I created pages and added a few other style-oriented plugins (Glamor and Typography) when I realized I wanted those. Then, I used GraphiQL to create queries that could pull my Contentful content into my site.

After creating queries for each type of content I wanted (daily schedule, list of tricks & commands Watson knows, and a photo gallery), I saved each query in its corresponding page to see if anything broke. There were a few instances in which GraphiQL hadn’t let me know I had errors in the little ways I tried to sort data.

Here’s an instance of a GraphiQL query that worked in there but not in the actual code. It needs to read (sort: {field: [order]}) with the square brackets around the word “order” because there are multiple fields I can sort by; I had forgotten the brackets and GraphiQL said it would work, but then it didn’t work. Here’s the correct format:

Once I got my GraphQL queries working, I called a couple friends for help rendering the data to each page on my site. They called this “printing,” a word that I enjoyed because it reminded me of the Vincent Van Gogh poster I had.

Here is one of the first pages I rendered into a table format: 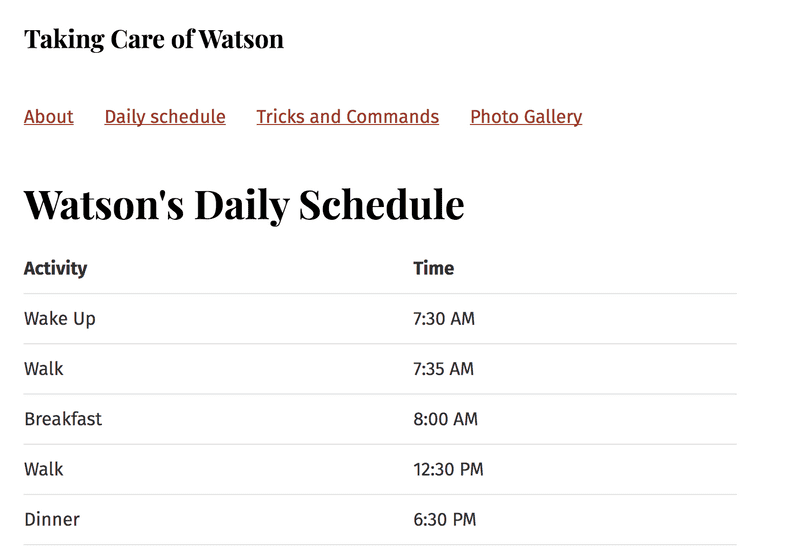 Here are more examples of pages I created. This is the photo gallery page:

The list of Tricks & Commands presented a complex challenge because not all entries on Contentful included the same content. For example, we got errors if we tried to query for a photo since some entries had photos and some did not.

Because each entry was inconsistent, my friends helped me figure out a way to use JS to make sure we only requested a photo to be printed IF the photo existed. And if a particular entry didn’t have a photo, the computer could forgive it (just this once). Here is the code from that page:

It was awesome to get this all working because it’s clear how fast it would be to add more content without having to write any fresh code. Amazing. For example, if I teach my dog 10 new dog tricks tomorrow, I could add these tricks to Contentful, restart the dev server, and have an up-to-date site. Done.

This workflow would be exponentially beneficial to bigger teams of editors and developers since it reduces the amount of legwork necessary to implement content changes. Does this mean that using React + Contentful means you’re working yourself out of a job? Not likely; it probably just means you’ll get to focus on improving old stuff and building new stuff instead of maintaining (yawn and ouch) old stuff.

My next step is to learn React better so I can do some fancy designs. I’d also like to see Contentful clarify their API docs and to see GraphiQL quit lying to me about how to sort things.

Also, I’m still trying to figure out why sometimes field names aren’t updating in GraphiQL when they are changed in Contentful (restarting the dev server didn’t fix that).

Now, for the most important question: who wants to babysit my dog? Alexa? Siri? Maybe someday. :)